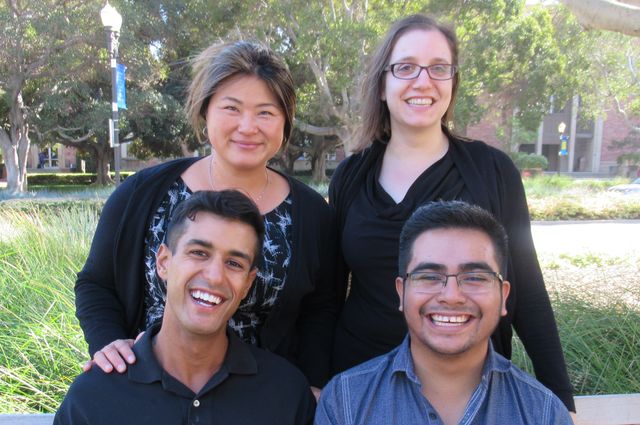 California Gov. Jerry Brown helped redress decades of HIV-related stigma when, on Oct. 6, he signed a measure eliminating the possibility that a person can be convicted of a felony for exposing others to HIV, thus bringing it in line with the treatment of all other communicable diseases in criminal law. The passage of Senate Bill 239marked a major milestone in one of the most-groundbreaking HIV modernization efforts in the country and capped a three-year-long initiative, in which the reports and testimony of UCLA School of Law students, academic fellows and alumni had a profound impact on Sacramento lawmakers.

Now, the intentional transmission of an infectious disease — which had been a felony punishable by up to eight years in prison — is at worst a misdemeanor resulting in six months in jail. In addition, SB 239, which was introduced by state Sen. Scott Wiener (D-San Francisco), deleted from the books a law that made it a felony to solicit sex while HIV positive. The reforms alleviate a harsh burden on marginalized women and people of color who had been disproportionately affected by many HIV-related state statutes enacted in the 1980s.

“Our research corrects what continues to be a long-held and mistaken belief: that these laws keep the public, you and your loved ones safe,” said Ayako Miyashita, director of the law school’s Los Angeles HIV Law and Policy Project and former Sears Law Teaching Fellow at the Williams Institute in the UCLA School of Law.

“These laws have no effect on the HIV epidemic other than to destroy the lives of people coming into contact with the criminal justice system,” Miyashita added. “People are still under the assumption that HIV will kill, and that is simply inaccurate. While HIV is still a serious, chronic condition, we know it’s really HIV stigma that kills — the stigma is why people don’t get tested and partly why people don’t stay in care.”

Williams Institute researchers identified the disparate impact that the HIV-related criminal laws had on disadvantaged communities and pointed out that modern medical treatments have significantly reduced the risk of transmitting and acquiring HIV. Advocates from the Los Angeles HIV Law and Policy Project utilized that data in pressing lawmakers for reform.

Among other findings, the Williams Institute research revealed that women made up 43 percent of those cited under the old law, even though only 13 percent of Californians living with HIV at the time were women. In addition, 67 percent of the people who had contact with the criminal system related to their HIV status were black, Latino or Latina, and 15 percent were foreign born.

“Being able to provide complete, accurate and detailed data specific to a policy issue that was currently being re-examined on a statewide level was incredibly rewarding,” said Amira Hasenbush, UCLA alumna and now the Jim Kepner Law and Policy Fellow at the Williams Institute, who conducted the research on the enforcement of these laws. “Several times, legislators specifically cited our data points to emphasize the impact that these laws had on real lives.”

‘This bill decreases the likelihood that I will be arrested’

For some members of the UCLA Law team, the work was personal.

“As a person of color living with HIV, the passage of this bill decreases the likelihood that I will be arrested because of my serostatus,” said Hussain Turk, a fellow at the Los Angeles HIV Law and Policy Project. Turk briefed and testified before lawmakers, including the California Legislative LGBT Caucus and the state’s Senate Committee on Public Safety. “I am grateful and relieved, but, most importantly, I am energized to continue advocating for the black and brown communities that are most heavily impacted by the HIV epidemic.”

Turk, who graduated from the law school in 2016, worked alongside 2017 graduate Anthony Pinggera and current students Mariah Lohse and Luis Vasquez.

Vasquez, now a second-year law student, performed legal drafting and research last summer for a subcommittee of Californians for HIV Criminalization Reform, a group that spearheaded the passage of SB 239. The work helped him earn a coveted position at the U.S. Government Accountability Office in Washington, D.C., for next summer.

“Through my work in support of SB 239, I came to see how legal practice can elicit positive change by showing the real, human impact of our laws, which our discipline sometimes fails to consider,” Vasquez said. “Knowing that the skills I have been developing at UCLA Law helped contribute to this incredible change in the law is simply unbelievable. I look forward to seeing how they can be used next to serve those in need.”